Allo! Allo! In this 25-minutes codelab, you will build a fully functional web application from scratch with the help of Yeoman and FountainJS. The sample app will be written in React, Angular2 or Angular1.

Don’t know any React or Angular? That’s okay, we’ll walk you through it. However, we do assume that you have some previous JavaScript experience.

Build this sample app with Yeoman

The sample web app you’ll build today will be a implementation of TodoMVC. You will be able to add todos, delete todos, filter todos, and together we’ll add a feature to save todos offline.

What’s in this codelab?

We will build the above TodoMVC app from scratch. Each step builds on the previous so go through each step one by one.

It will take approximately 25 minutes to complete this codelab. By the end, you’ll have a snazzy TodoMVC app and your computer will be set up to build even more awesome web apps in the future.

Let’s get started with Step 1 »

Most of your interactions with Yeoman will be through the command line. Run commands in the Terminal app if you’re on Mac, your shell in Linux, or cmder (preferably) / PowerShell / cmd.exe if you are on Windows.

Before installing the Fountain Webapp Generator, you will need the following:

You can check if you have Node and npm installed by typing:

If you need to upgrade or install Node, the easiest way is to use an installer for your platform. Download the .msi for Windows or .pkg for Mac from the NodeJS website.

The npm package manager is bundled with Node, although you might need to update it. Some Node versions ship with rather old versions of npm. You can update npm using this command:

You can check if you have Git installed by typing:

If you don’t have Git, grab the installers from the git website.

Once you’ve got Node installed, install the Yeoman toolset:

If you see permission or access errors, such as EPERM or EACCESS, do not use sudo as a work-around. You can consult this guide for a more robust solution.

It is a good idea to check that everything is installed as expected by running commonly used Yeoman commands like yo with the --version flag as follows:

Versions of the CLI tools that this codelab works with

Technology changes quickly! This tutorial has been tested with yo 1.8.4. If you are running into issues with a newer version, we would like to hear about it. Please open up an issue on our tracker.

In a traditional web development workflow, you would need to spend a lot of time setting up boilerplate code for your webapp, downloading dependencies, and manually creating your web folder structure. Yeoman generators to the rescue! Let’s install a generator for FountainJS projects.

You can install Yeoman generators using the npm command and there are over 3500+ generators now available, many of which have been written by the open-source community.

This will start to install the Node packages required for the generator.

If you see permission or access errors, such as EPERM or EACCESS, do not use sudo as a work-around. You can consult this guide for a more robust solution.

Along with using npm install directly, you can search for generators via the Yeoman interactive menu. Run yo and select Install a generator to search for published generators. 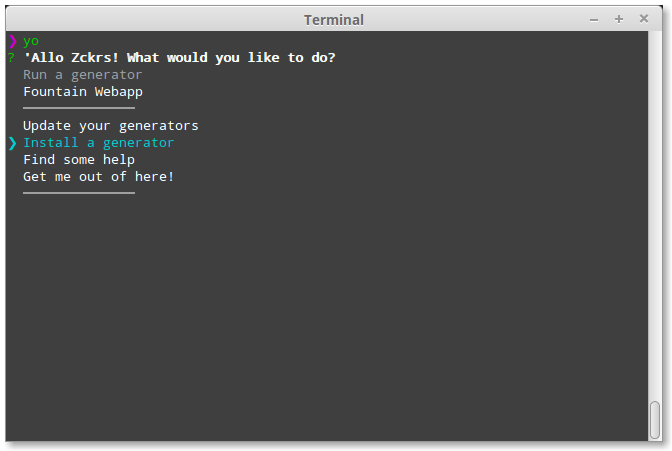 We’ve used the word “scaffold” a few times but you might not know what that means. Scaffolding, in the Yeoman sense of the word, means generating files for your web app based on your specific configuration requests. In this step, you’ll see how Yeoman can generate files specifically for your favorite library or framework — with options for using other external libraries like Webpack, Babel and SASS — with minimal effort.

Create a mytodo folder for all your codelab work:

This folder is where the generator will place your scaffolded project files.

Run yo again to see your generators:

If you have a few generators installed, you’ll be able to interactively choose from them. Highlight Fountain Webapp. Hit enter to run the generator.

As you become more familiar with yo, you can run generators directly without the use of the interactive menu, like so:

Some generators will also provide optional settings to customize your app with common developer libraries to speed up the initial setup of your development environment.

The FountainJS generator provides some choices to use your favorite:

For this codelab, we will use React, Webpack, Babel, SASS and the Redux TodoMVC sample.

Select successively these options with the arrows keys and the enter and watch the magic happen.

Yeoman will automatically scaffold out your app, grab your dependencies. After a few minutes we should be ready to go onto the next step.

Open up your mytodo directory to take a look at what was actually scaffolded. It’ll look like this:

src: a parent directory for our web application

gulp_tasks and gulpfile.js: our builder tasks

.gitattributes and .gitignore: configuration for git

After generation and installation you should have a fresh git repository already initialzing.

You can safely add a commit to save the current state by these commands.

To preview your web app in your favourite web browser, you don’t have to do anything special to set up a local web server on your computer — it’s part of Yeoman.

Open a new tab in your web browser on localhost:3000:

If you ever need to stop the server, use the Ctrl+C keyboard command to quit your current CLI process.

Note: You can’t have more than one http server running on the same port (default 3000).

Open up your favorite text editor and start making changes. Each save will automatically force a browser refresh so you don’t have to do this yourself. This is called live reloading and it’s a nice way of getting a real-time view of your application state.

Live reloading is made available to your application through a set of Gulp tasks configured in gulpfile.js and Browsersync configured in gulp_tasks/browsersync.js; it watches for changes to your files and automatically reloads them if it detects a change.

Below, we edited Header.js in the src/app/components directory. Thanks to live reload we go from this:

You have a TodoMVC app tested and you change the title header. You should edit test in `mytodo/src/app/components/Header.spec.js` **or** revert the change for demonstrate livereloading

For those unfamiliar with Karma, it is a JavaScript test runner that is test framework agnostic. The fountainjs generator has included test framework Jasmine. When we ran yo fountain-webapp earlier in this codelab the generator scaffolded files with pattern *.spec.js in the source folder of the mytodo folder, created a conf/karma.conf.js file, and pulled in the Node modules for Karma. We’ll be editing a Jasmine script to describe our tests soon but let’s see how we can run tests first.

Let’s go back to the command line and kill our local server using Ctrl+C. There is already a npm script scaffolded out in our package.json for running tests. It can be run as follows:

Every tests should pass.

You’ll find unit tests scaffolded in the src folder, so open up src/app/reducers/todos.spec.js. This is the unit test for your Todos reducer. For example we get focus on the first test who verify the initial state. (Note: on windows, you might need to add 127.0.0.1 localhost to your etc/hosts file)

And replace that test with the following:

Re-running our tests with npm test should see our tests now failing.

If you want run test automatically on change you can use npm run test:auto instead.

Replace the initial state by:

Fantastic, you have fixed the test:

Writing unit tests make it easier to catch bugs as your app gets bigger and when more developers join your team. The scaffolding feature of Yeoman makes writing unit tests easier so no excuse for not writing your own tests! 😉

To easily achieve this, we can use another Redux module called “redux-localstorage” that will allow us to quickly implement local storage.

The Redux store should be configured to use storage. Replace the whole your src/app/store/configureStore.js by this code:

If you look at your app in the browser, you’ll see that there are one item “Use Yeoman” in the todo list. The app is initialising the todos store if local storage is empty and we haven’t given it any todo items yet.

Go ahead and add a few items to the list:

Now when we refresh our browser the items persist. Hooray!

We can confirm whether our data is being persisted to local storage by checking the Resources panel in Chrome DevTools and selecting Local Storage from the lefthand side:

For an extra challenge, revisit unit testing in Step 6 and consider how you might update your tests now that the code is using local storage.

Ready to show your beautiful todo app to the world? Let’s try to build a production-ready version of it which we can ship.

To create a production version of our application, we’ll want to:

Phew! Amazingly we can achieve all of this just by running:

Your lean, production-ready application is now available in a dist folder in the root of your mytodo project. These are the files that you can put on your server using FTP or any other deployment service.

Build and preview the production-ready app

It will build your project and launch a local web server. Yo Hero!

Yeoman supports scaffolding out a lot more for Angular and other frameworks than what we’ve shown today.

For example, the Fountain Angular generator also supports creating new pipes, directives, services and components for you. A new components can be scaffolded by running yo fountain-angular2:component componentName, which will create your component file but also add a new componentName.spec.js for your unit test.

To find out all the sub-generators for installed Yeoman generators, you can use yo --generators: 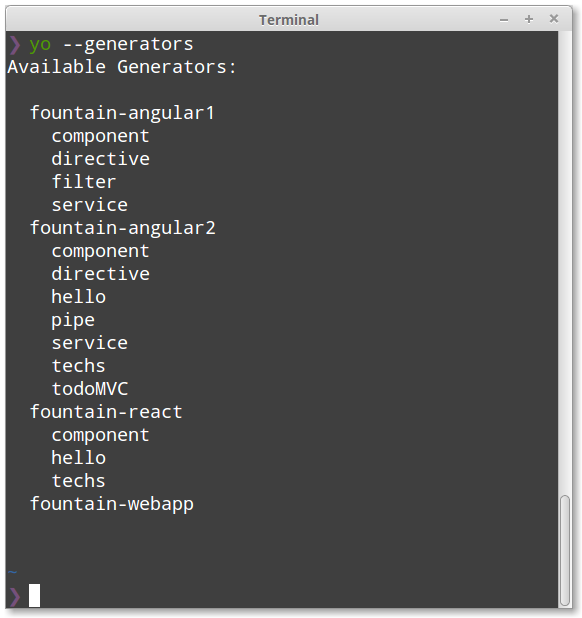 Where to go next

That’s it from your man-in-a-hat for now. Thanks!